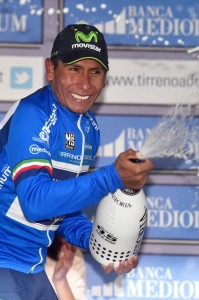 The Colombian climber won Tirreno-Adriatico thanks to his aggressive ride in the snow on Terminillo mountain and is hopeful of taking his second victory in the Basque Country after winning in 2013. He will also ride the GP Miguel Indurain on Saturday, alongside Alejandro Valverde, who will also ride Sunday’s Vuelta a La Rioja but will skip the Tour of the Basque Country.

“I have good memories (of 2013),” Quintana said of the Tour of the Basque Country. “The truth is that I like and know this race and many of my teammates know this race well too. That gives you peace of mind. With the team we have we should have no problem, and the course suits my form. Of course, we’ll have to consider the rivals too.”

“I had a steady week, including travel and the Classic. I tried to recover and avoid the pollen that gave me a few problems but I feel pretty good,” he said. “There’s a lot of climbing that day and you’ll have to have good legs otherwise you could lose a lot of time. Of course I like it.”

“He’s the world champion and so that says it all. He’s very strong and a complete rider. He’s good against the clock and the climbs are not very long, so the race route suits him. We will have to try to find a strategy to beat him.”

After the Tour of the Basque Country, Quintana will head to the Ardennes for Fleche-Wallonne and Liege-Bastogne-Lieg before targetting the Tour de Romandie in Switzerland. 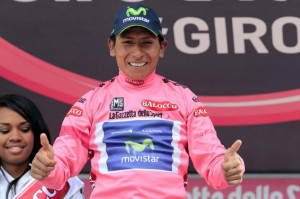 For the second year running, Nairo Quintana has been named the Colombian Sportsman of the Year of the year at a ceremony held in the JW Marriott hotel in Bogotá and sponsored by Movistar in conjunction with the El Espectado newspaper. Quintana made history in May when he became the first Colombian to win the Giro d’Italia and first Colombian in 27 years to win a grand tour.

“I’m really happy and proud to have claimed this award again,” Quintana said during his off the cuff acceptance speech. “It reinforces my commitment to keep taking efforts every year and do things better. I want to thank especially my wife, my daughter and all my family for always being by my side; to all the people supporting me through social media; and the sponsors and members of my team,  in Colombia and also in Europe.”

Quintana started the season with victory in the Tour de San Luis which was followed by second place overall at Tirreno-Adriatico and fifth place overall at the Volta Ciclista a Catalunya in preparation of the Giro. At the Italian grand tour, Quitnana won two stages and the best young rider jersey as he spent the last five days of the race in the maglia rosa.

Skipping the Tour saw Quintana successfully defend his Vuelta a Burgos title before the Vuelta a España which he started as a favourite. The race started in the best way possible for Quintana with Movistar winning the team time trial in Jerez De La Frontera and taking hold of the leaders jersey. Quintana took over the race lead on stage 9 but would spent just one day in the red jersey as he crashed during the time trial to Borja.

It would get worse for the 24-year-old though as another crash the next day resulted in a fractured right shoulder blade, forcing him to abandon the race.

“It’s really rewarding for all sportspeople like us to see our efforts recognised after a long year,” he said. “I could finally raise my arms victorious today after my crash in the Vuelta a España – I didn’t really want to make you suffer, but rather cry out of emotion, as I did during the Giro. It was really touching to see everyone in pink and all the media supporting us with such a beautiful colour.

Next year, Quintana will make a return to the Tour de France where he finished second overall in 2013 along with winning a stage and the best young rider and mountain classifications.

“We hope to repeat last year’s exploits in 2015, this time in yellow!”

Soon all the specials in our store will be post here.